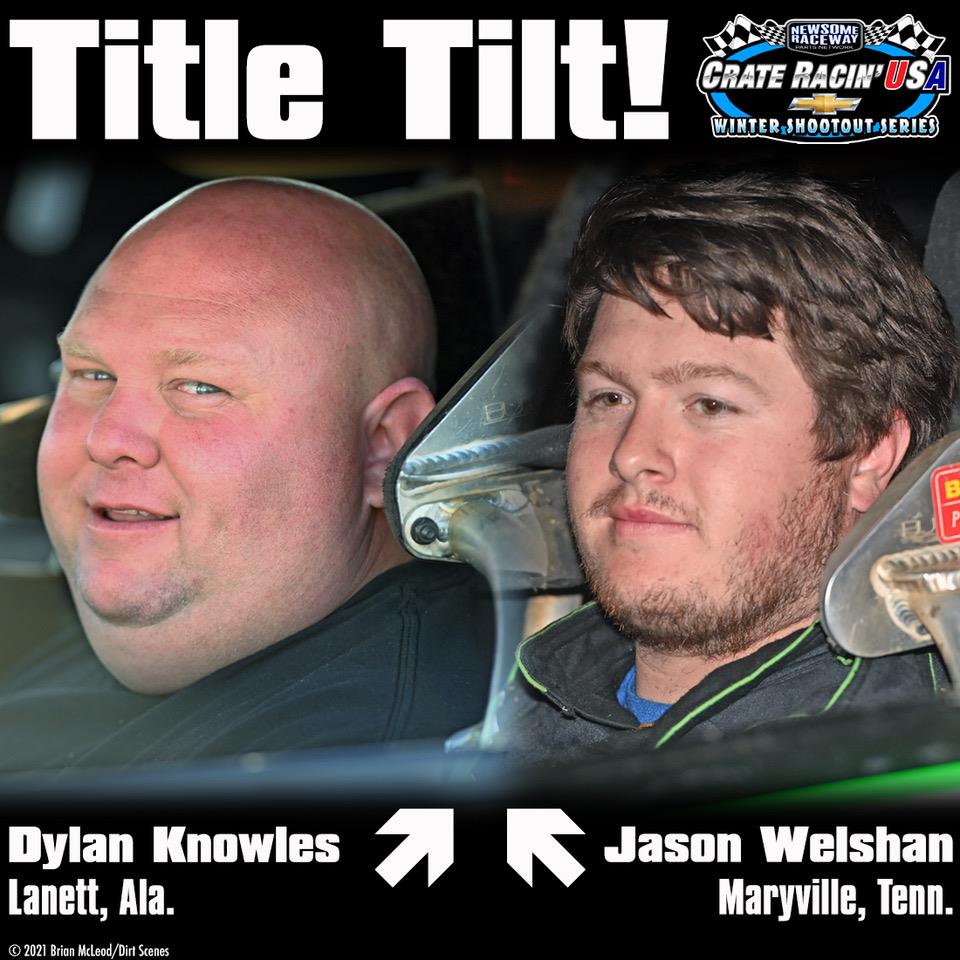 ADAIRSVILLE, Ga. (Feb. 6) — When the 2021 version of the increasingly-popular Crate Racin’ USA Winter Shootout Series was announced in early December, it was a schedule that promised more events than any previous season in the 6-year history of the miniseries.

It also seemed to promise that it might draw more interest than has ever been witnessed in the five previous years it has been held. Nine races, and a $2,500 championship on the line, and the possibility of enough excitement and drama to pack a solid punch.

High Car Counts; Season Winds Down
Six races into what has now become an eight-race schedule (one event slated Jan. 15 at Volusia County Speedway in Barberville, Fla., was canceled by rain), and above average to phenomenal car counts have been the norm. Numbers have risen to as high as 78 cars per event. Yes, you read that correctly: 78 drivers signed through the pit gates Feb. 4 at East Bay Raceway Park in Gibsonton, Fla!

The next night at the same track, 76 machines rolled into the third-mile oval’s pit area. Mathematically speaking, the average car count has actually been 62.8 entries per race through the first six events. While your fingers are busily burning up a calculator, you can also note there have been five different winners in six races!

Mark Whitener of Middleburg, Fla., is the only driver to win twice on the series, and he did that on back-to-back nights Feb. 4-5 at East Bay. Other winners include Jason Welshan, Michael Page, Kyle Bronson and Kyle Hardy.
Just two races remain: Feb. 25-27 at Clarksville (Tenn.) Speedway and March 18-20 at Modoc (S.C.) Speedway.

A Developing Points Battle
Toss something else into the kettle that is now threatening to reach a near-boiling temperature, and that’s a sizzling championship battle that appears to be going to the wire since current points leader Dylan Knowles of Lanett, Ala., holds an eight-point advantage (500-492) over Jason Welshan of Maryville, Tenn.

Jake Knowles sits just 50 points behind in fourth place, while Whitener has emerged as a potential title contender despite missing the season-opening Ice Bowl held Jan. 10 at Talladega Short Track in Eastaboga, Ala. Whitener, who is widely considered to be one of the top Crate Late Model drivers in the country, might have attended one less race than his fellow competitors but is sitting third in points. He’s still in serious contention considering he rests just 26 markers behind the current championship leader Dylan Knowles in the standings, which is an amazing feat considering his absence from one event.

Whitener has seriously considered heading to the Crate Racin’ USA Winter Shootout Series portion of the Tuckassee Toilet Bowl Classic [Feb. 25-27] at Clarksville (Tenn.) Speedway, but the 40-year-old driver faces a quandary when it comes to the series finale [March 18-20] at Modoc (S.C.) Speedway. That final race date coincides with the Bristol Dirt Nationals scheduled March 15-20 at Bristol (Tenn.) Motor Speedway, and Whitener has already made plans to attend that history-making week at the high-banked speedbowl in upper East Tennessee.

Knowles, Welshan Ready for Title Battle
Barring mechanical troubles on their cars, a possible late-season surge by Jake Knowles or a firm commitment to run the final two events by Whitener, it looks like the title battle will slim down to a showdown between Dylan Knowles and Welshan. There isn’t much space between them with two races remaining on the schedule, and both drivers are prepared for the final stretch.

The Winter Shootout Series is coming off a very successful three-race weekend at East Bay Raceway Park in Gibsonton, Fla., and both drivers survived the weekend (despite frustrations), and emerged from the high-stress visit to the Sunshine State separated by just eight points in the chase for the $2,500 championship.

Welshan visibly struggled with the notoriously-difficult facility, but got pointed in the right direction on the final night with a fifth-place showing, which was his best finish of the weekend.

“I just wasn’t taught to race on a surface like this one,” Welshan said after the final race of the weekend. “It’s way different dirt than where I started. I’ve never been a wheelspin type of racer, but I can tell you people in my home area don’t have a clue unless they’ve been here previously. It’s a very challenging place, and I’ve never been anywhere in the country and applied the same stuff to either my car or my driving style that we had to use down here.

“I was very frustrated all week, but we never gave up and got out of here with a good finish on the final night. There ain’t no quit in my bunch, and while this racing deal can be the most humbling sport you’ll ever find, we kept diggin’ and we’ll definitely be back here, even though I said all weekend we’d absolutely never return. We’ll take the last night’s results as a positive, and head for the final two races.”

Knowles had better luck in his efforts, placing eighth, third and 11th in the three races at East Bay. It was a confidence boost considering his lack of experience at the track, and a bigger shot in the arm to emerge with the points lead.

“We planned to run the whole Winter Shootout Series from the start, and we came into the weekend at East Bay [Raceway Park] kinda down about our chances, but we ended up having a good weekend and taking over the points lead,” Knowles said. “It’s been a learning experience for us, and especially at both Volusia [Speedway Park] and East Bay. We were pretty confident we could run good, and we’re maybe feeling a little better now about our team and equipment after having a good weekend. Leading the points is a real good feeling, but it’s far from over.”

Knowles will have to maintain that slim lead over Welshan, a long-time veteran with a reputation for running well at Clarksville (Tenn.) Speedway. The final two races will also put both competitors back on more characteristically-familiar dirt as they prepare for the big showdown.

“I really like this short Winter Shootout Series deal,” Welshan said. “It’s something we can do before our season unfolds and gets busy back home, and it’s been a good deal to showcase our Savage Chassis brand. Dylan [Knowles] has done a great job and has the points lead, but we’ll work hard right to the end. We’ve helped each other back and forth, and it’s fun when you can race this hard for a championship with a guy, and still be willing to help each other. It’s gonna be a real doozie before it’s over, and I’m definitely looking forward to racing against him for the championship. It’s looking like it’s gonna come down to the finale at Modoc [Speedway], and we’ll probably see a close battle to the finish.”

Knowles admitted he felt that Welshan might have the slight advantage at Clarksville considering his past success at the facility, but the two drivers might be more evenly matched when the miniseries hits Modoc for the finale.

“We’ve really been wanting to get the opportunity to race for a championship like this one,” Knowles said. “We’ve raced for track championships a few times, but never anything on this level. Until this deal here, we haven’t really run seriously for points over the past five or six years.

“It’s probably going down to the end, I’d think,” Knowles continued. “It’s a pretty close points race right now, and it’s great to be leading since we’re about to head into the final two races, but I’d have to guess it’s far from over. It’s been a really close battle the whole way, and it’s definitely fun for us to be in the middle of it.”